(I was compensated for posting a review of this attraction.  All opinions are my own, or my family's.)
I was given the opportunity to go to the Hollywood Wax Museumwith my family when we went to Myrtle Beach last week.  The only problem we had was locating it.  We found it across the street from Broadway at the Beach.  I recommend driving there even if you're going to Broadway, because otherwise you're crossing 17 to get there.  The museum consists of 3 parts.  The first (and main) one is the wax museum itself.  My kids agreed that about 60% of the figures were accurate or looked close enough like the stars to pass.  It took us about 45 minutes to an hour to really enjoy the figures themselves. 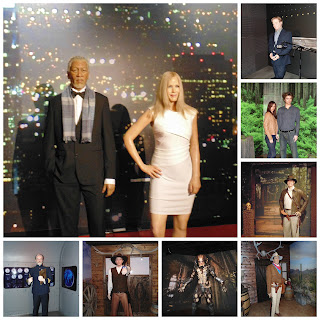 There were areas for interaction (some width props) as well, just don't touch the figures.   My husband and I would have loved to beam up to the Enterprise.  My kids were excited to see Samuel Jackson.

Then there was Bruce Lee.  My son posed there as though he were going to start doing one of his Choi patterns.  I had to stop by and visit Captain Jack and Audrey Hepburn.  My daughter found Robert Downey, Jr.  My husband decided to go bowling with Nick. 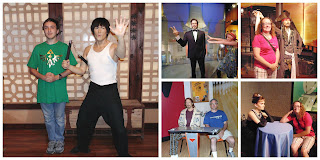 My parents were with us, but didn't pose for pictures (except for the group one at the entrance).  Once we were done viewing the figures, we went downstairs for the other two attractions.  One was a haunted research facility (Outbreak) where researchers ended up with zombies.

The other was Hannah's Mirror Maze.  My daughter didn't like Outbreak (she's not big on horror stuff or scary stuff) and I didn't care for the Mirror Maze (my vision, or lack thereof, played a big part on my side).All together though, my family agreed that it was a lot more fun than they expected.  The price is comparable with all the other attractions in the area, so not too bad for what you get.  If you like visiting the stars, definitely consider dropping by.  My Readers receive $2 OFF All Access Pass at the Myrtle Beach Hollywood Wax Museum Entertainment Center!  Please visit http://www.hollywoodwaxmyrtlebeach.com/ for more information

Proud Member of The US Family Guide Network